LinuxCNC is a Debian based distribution which includes realtime kernel for running stepper drivers connected to a parallel port, EMC2 the graphical user interface for working with CNC machines. This howto assumes you have already produced Gerber files, eg by plotting your KiCad PCB layout.

Utility for converting Gerber files to .ngc files which are understood by LinuxCNC.

To install pcb2gcode on Fedora 25:

To install pcb2gcode on LinuxCNC itself or a Ubuntu workstation:

Following generates front.ngc, back.ngc, drill.ngc toolpath files with coordinates reset to resulting toolpaths instead of original PCB layout coordinates. All drilling is squashed into single tool path, in our case we used only 1mm drill. The design will not be tiled, increase tile-x and tile-y to cut multiple identical copies of the design.

To use LinuxCNC in production you need realtime capable kernel. Folks at LinuxCNC have packaged it up and it's installable as a separate ISO file. To download it and copy to a memory stick, make sure you replace sdz with the device corresponding to the block device of your memory stick:

Install it to a PC which has parallel port, USB-parallel port converters we tried didn't have drivers for the rather outdated realtime kernel included with LinuxCNC.

Following is not going to go in depth with CNC frame construction. CNC frames can be ordered from AliExpress for reasonable price, 3020T has (trapezoidal) lead screw and can be ordered for around 500USD. Note that lead screw is cheaper and requires less torque to hold the position whereas ball screw is more precise but expensive and might need more powerful stepper motors to hold position, see pros and cons here.

Use a breakout board to make it easier to connect stepper drivers to the parallel port. Note that the breakout board does not include any essential functionality, it simply makes things more convenient, has a relay for turning the spindle on and off and as a cherry on the top uses optocouplers to electrically separate parallel port from the rest of the machinery to protect the PC in case of a disaster.

Wiring diagram for breakout board

Poor man's solution is to simply use a printer cable, connect individual wires to the stepper drivers. In our case we used Toshiba TB6600 based stepper drivers: 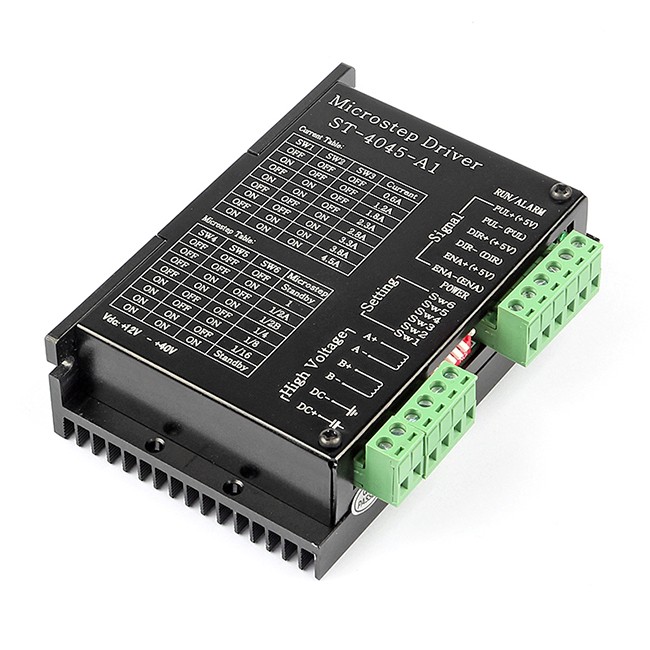 For 3020T the NEMA 23 stepper motors were suitable, NEMA 17 steppers were also tested but didn't deliver enough torque to drive the CNC. Note that NEMA 17 and NEMA 23 in reality refer to the mounting hole dimensions, there are variety of motors made by different manufacturers and slightly different dimensions and electrical characteristics. 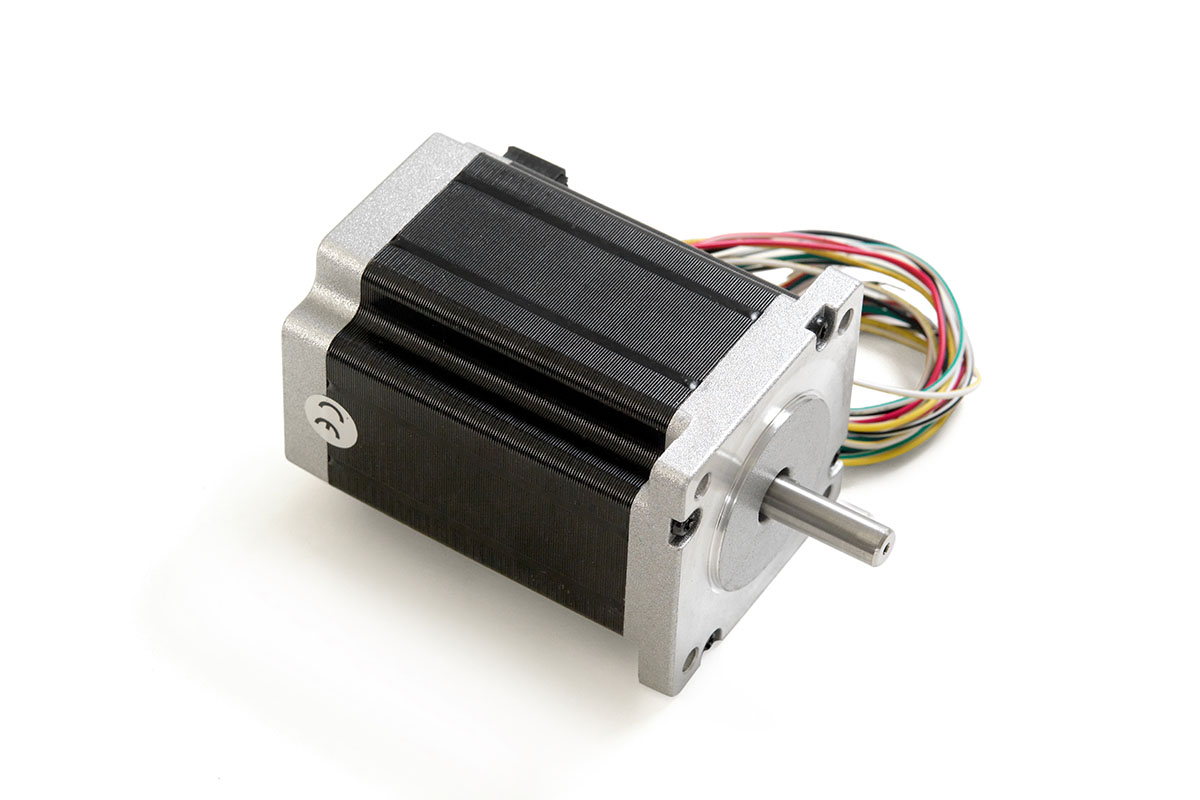 Note that in certain configurations the CNC frame comes without stepper mounting bracket. You can try your luck with threaded rod or use a 3D printer to print one. Also shaft couplers are required to connect NEMA motors to the CNC frame's lead screws: 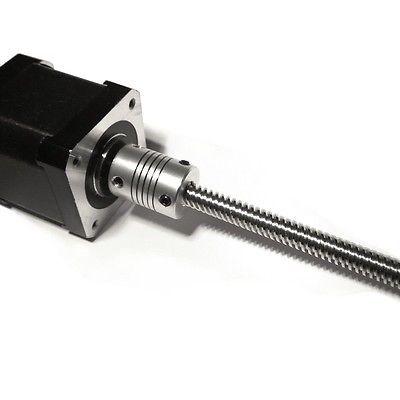 Note that it is probably easier to purchase whole kit which includes at least steppers and spindle.

For most drilling holes 1mm drill bit is enough: 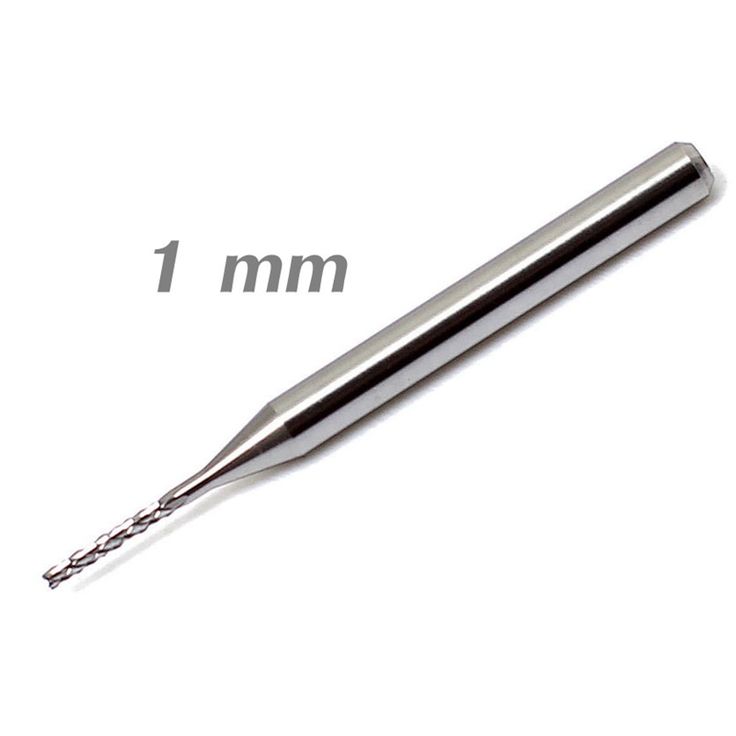 The pcb2gcode command example merges all drill tool paths so you can leave the machine unattended during the drilling job, otherwise tool change is requested while moving to a drilling hole of different size.

Place PCB on the sacrificial material and use paper tape to fix it to the board. Make sure spindle is stopped and insert 60 degree mill bit. Press F1 to toggle Emergency Stop and press F2 to turn on stepper drivers. Use up, down, left, right arrow and Page Up/Down buttons to drive the CNC head along X, Y and Z axes. Slide Jog speed to the max to move faster. 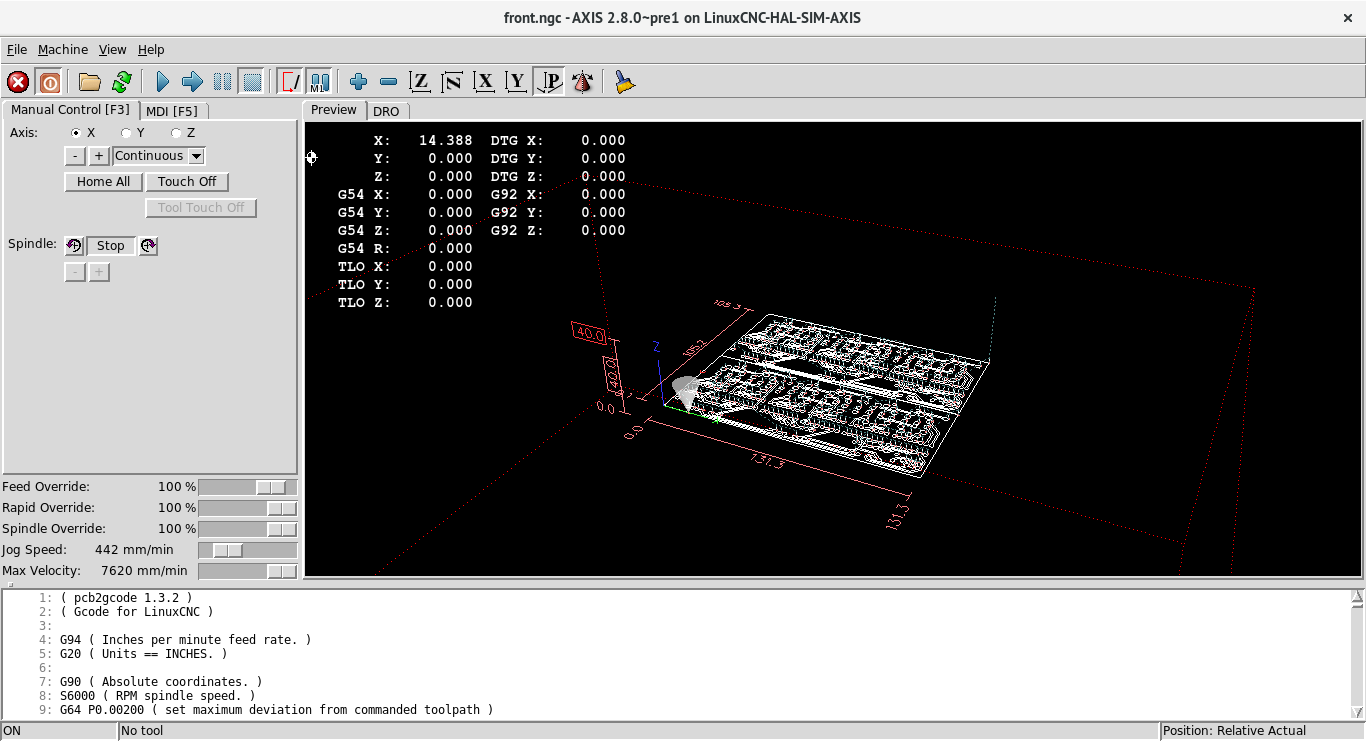 Once the milling is ready do not power down the steppers as you would lose the X and Y axis alignment. If you have manually controlled spindle simply stop the spindle. Replace the mill bit with drill bit. Use Page Up and Page Down to drive the drill bit near the copper surface, but not into it. Select Z axis and hit Home button to rehome Z axis for drill bit. 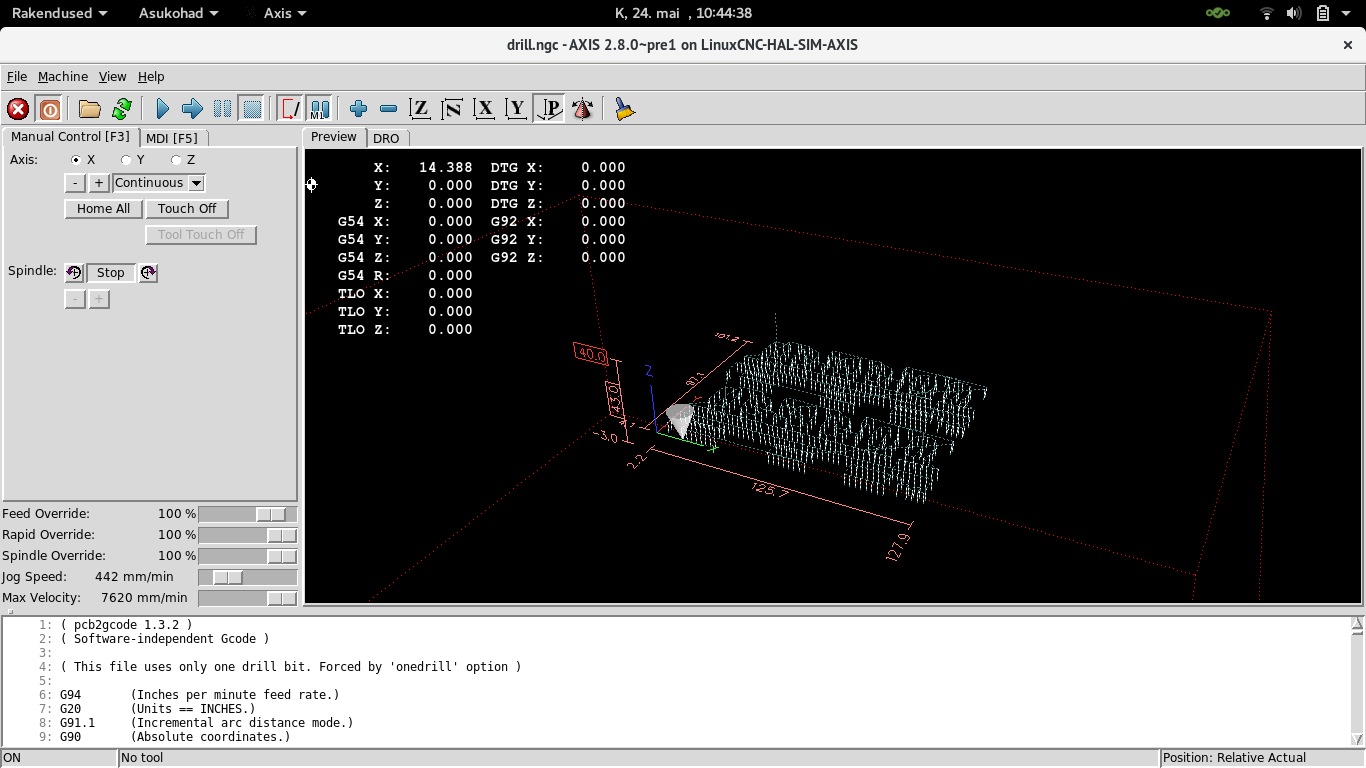 Move the head away while making sure you don't accidentally run into the frame limits as this would again lose the X and Y alignment. 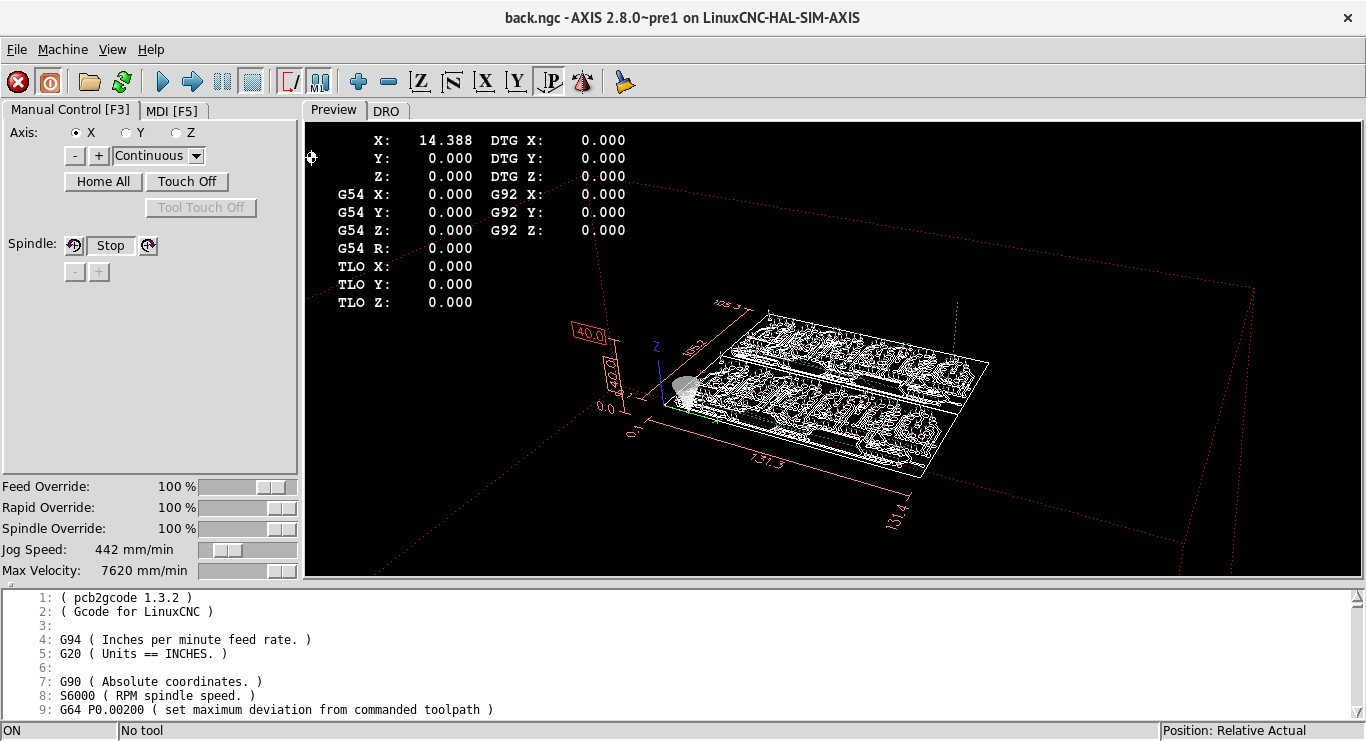 EMC2 on Ubuntu or Fedora

To install dependencies on Fedora 25:

To install dependencies on Ubuntu 14.04:

Run from source tree without installing to system: